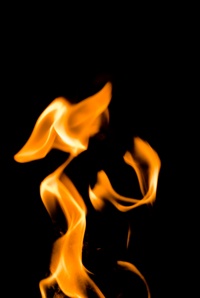 Vernía placed a small bottle and a single cup on the table. She was nervous, Callum realized.

“I’ve drunk of Heart’s Desire before. I don’t understand how it will help us.” He gave his sister a wicked grin. “Unless, of course, you think I need a good lay.”

“Callum!” Vernía shook her head. “Any hedge witch can learn to make a basic Heart’s Desire, or Pluck, or what have you. But what you’ll get is a watered-down version of the real thing. A simple aphrodisiac or inhibition-lifter. No, the real thing – that’s deep magic. This,” she tapped the bottle, “this was prepared by the Blackthorne.”

“Ah.” Callum picked up the bottle and held it up to the lamp. The amber liquid inside seemed to glitter and swirl. He handed it back to his sister. Vernía broke the black wax seal and poured a careful third into a small cup.

“It was hellishly expensive,” she said. “I could only afford a gill. I hope it’s enough.”

Callum spun the cup in his fingers, then shrugged. He tossed the drink back and looked at Vernía. “Now what?” he asked. Or tried to ask. His tongue was suddenly thick, and the words seemed to lose themselves in his mouth. He was already fading into the dark.

He blinked several times before he realized that the dimness was due to his surroundings, not the drug. He stood at one end of a narrow hall lined with doors. Music and laughter drifted down from the far end: a taproom, from the sound of it. Halfway down the hall he could see a staircase leading up, and at the foot of the stairs, hanging from a bent nail, a lamp guttered with a dull red flame. Upstairs, a door shut with a soft click. Callum pressed himself back into the shadows as a golden-haired woman in a rose damask gown glided down the stairs toward the noise.

b (1) : extending well inward from an outer surface <a deep gash> <a deep-chested animal>
(2) : not located superficially within the body <deep pressure receptors in muscles>

2: having a specified extension in an implied direction usually downward or backward

More in the Sable Mark series can be found in previous posts: Need, Salt, Beast, The Other Sort of Need, Damask.