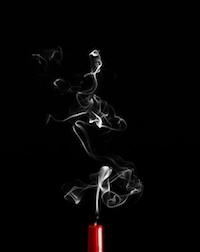 The first thing he made her do was burn the gown. She tore the beautiful rose silk into narrow strips and fed them, one by one, into the flames. It smelled like burning hair. When he wasn’t looking, she tucked a scrap of cloth into the pocket of the too-large linen trousers he had given her to wear.

That was three days ago. This morning her dreams woke her early, and when the sun finally broke over the hills, the ruddy dawn found her sitting by the window. She fingered the strip of silk and thought about fire until the sound of voices in the hall disturbed her.

“When did she arrive?” The woman’s voice was familiar.

“The morning after the Blackthorne left. Bright and early, just like you. She reeked of apple.” His voice was carefully devoid of curiosity, but she could sense his disapproval.

“Ah. Well. We did find her in one of the salons.” A pause. “We weren’t certain this was where she needed to be. I had hoped – that is, I know you’ve had experience with this sort of thing. You don’t mind, do you? I think it’s terribly important – ”

“Aye.” He cut her off. “Aye, I do mind. A little warning would have been a fine courtesy. But I will help her.”

Footsteps outside her door. A soft knocking, almost hesitant. “Seonid?” Martin called. “There’s someone here for you.”

She blew out the candle and watched the smoke trail away, its eddies and curls writhing like the ghosts of desire. Her body flushed with a remembered heat that had nothing to do with the drift of brittle black ashes on the hearth. She had finally placed the woman’s voice.

The taste of honey strong on her tongue, Seonid opened the door.

1 a:  to hang down so as to drag along or sweep the ground
b:  to extend over a surface in a loose or straggling manner <a vine that trails over the ground>
c:  to grow to such length as to droop over toward the ground

2 a:  to walk or proceed draggingly, heavily, or wearily : plod, trudge
b:  to lag behind : do poorly in relation to others

3:  to move, flow, or extend slowly in thin streams <smoke trailing from chimneys>

More in the Sable Mark series can be found in previous posts.

8 thoughts on “Ghosts of Desire”