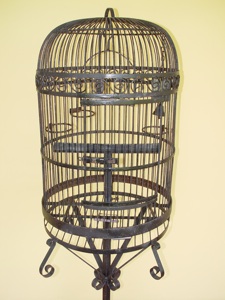 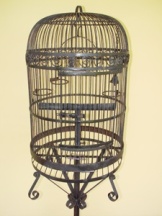 The bell rang, and I knew we were finally underway. I left the curtains shut, reluctant to watch the landscape slide away beneath us. Here in my room I could almost believe I was home – not the place I was leaving, but the place I had left so long ago. But there was the rose, of course.

The polished metal of the replicated bloom shimmered faintly. It was really a lovely imitation: the craftsmanship was exquisite. But it was an imitation. Flowers such as this did not grow here. In fact, I would be surprised if the younger generations had ever seen a picture of a rose, let alone an actual blossom.

In the corner of the room hung a wicker cage. Jax sniffed at it, curious as usual. “It’s a bird,” he said, eyes widening. I took a closer look.

“Not a real one, I’m afraid. It’s clockwork. See here?” I opened the door and touched a tiny key tucked under one gleaming wing. I glanced at my tiny companion and realized that he had likely never seen a bird before, real or mechanical. With careful fingers I wound the key and withdrew my hand from the cage. The bird shivered, raised and lowered its wings, and began to sing.

The first sweet notes transported me instantly to another time, another place, where the oceans were blue and flowers grew on hilly slopes, and birds sang out their endlessly varied melodies to the dawn.

I smiled at the unexpected thickness in the saguin’s voice. “It is beautiful, true. But if you had only heard the birds in my mothers garden when I was small…” The bird whirred softly and started a new tune. “No, these are songs for heartbreak, Jax. Replicas only. But beautiful, in their own way,” I added, noting the disappointment in his eyes.

A brass petal fell to the table with an almost imperceptible click.

This post was written (in a hurry, I’m afraid) for Scriptic.org, and follows The Jade Dragon and The Rarity of Rain. It is part of the Jade Dragon series.

For the Scriptic prompt exchange this week, Cheney gave me this prompt: These are songs for heartbreak..

I gave kgwaite this prompt: It’s the end of summer. What comes next? Give us a story about transitions.