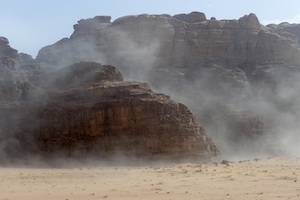 In the year that Verdure burned, twenty-four starship pilots committed suicide. Nine more died the year after that, broken by being tethered to one world. Most simply drifted away, cast loose on the desert winds. Belyn Morrow was not one of them.

The fuel depositories were destroyed with the spaceport in Verdure. Shuttles flew for as long as there was fuel in their tanks, ferrying officials and their families to places of safety. I did not realize it at the time, but my mother, brother and I were among those few fortunate citizens who won the draw for unfilled seats. Within weeks all of the graceful, sleek ships were grounded.

Belyn Morrow signed on with The Jade Dragon immediately. Before Verdure, the old dirigible had been scheduled to be decommissioned. Morrow made the case for refitting her instead, arguing that airships were the only remaining practical transport between the far-flung oases of Loess. The Provisional Government agreed, and the Airship Transportation Service was created. They even offered Morrow a position in the High Command, but she refused with no explanation or apology, accepting a post as Airship Captain onboard the Dragon instead.

This much I had known before boarding the ship. Communications on Loess were never reliable to begin with – the dust storms interfere with radio signals, I understand – and without the shuttles, settlements were virtually isolated from each other until the ATS started regular routes. But even with news traveling at the speed of the air currents, everyone knew the story of Captain Morrow’s Dragon.

What I could not have known, until now, was the intensity of her passion for this ship, and – being denied the stars – for the relative freedom of these bounded skies.  She was a sandstorm locked in a bottle. Everything she had been before the war was compressed into an unimaginably small space.

True, I lost my home in the war, my entire world – the only one that I had known. But Morrow lost them all.

This post is part of the Jade Dragon series. Though I try to make these installments enjoyable as individual pieces, I highly recommend that you read the series from the beginning to really get what’s going on.

This post was written in response to the Trifecta Writing Challenge weekly prompt:

1: the period of about 3651/4 solar days required for one revolution of the earth around the sun
2: a cycle in the Gregorian calendar of 365 or 366 days divided into 12 months beginning with January and ending with December
3 : a calendar year specified usually by a number <died in the year 1900>

12 thoughts on “All the Worlds”