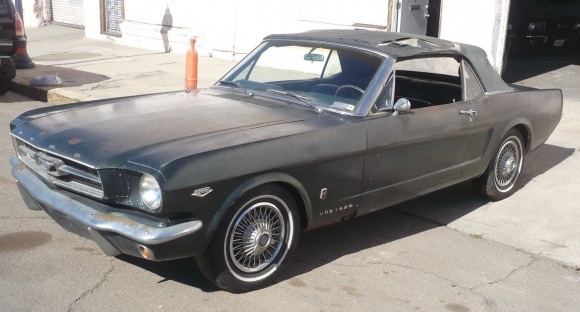 [Note: a short version of this story was posted at yeah write’s fiction|poetry challenge, where the word limit is 750 words. Many thanks to Rowan G and her brutal editing skills for cutting it down to size. We thought it might be interesting to show how we whittled this down to the bare essentials. I’d be curious to know what readers think. Which version is more effective? -ch]

The 1965 Ford Mustang was my birthday present, but truth be told, she was kind of a mess. The soft-top was shredded. The driver’s side door squeaked and the passenger side only opened from the inside. All the seals were cracked. Reservoirs stood empty or were missing altogether. Hoses, same thing. The cracked coating on the wires indicated sun and heat damage. No rust, but from the faded paint, she might have been standing with her hood open for years.

Anyone else might have walked away, but I loved her from the moment I saw her. She was perfect.

And she was a present from Jack, who knows me probably better than anyone. Who I don’t know at all anymore, it seems. For the last few weeks I’ve been patient, really. They said give him space, so I gave him space. They said give him time, so I did. And the whole time I missed him something fierce, the brother of my heart.

“The time for being patient has passed,” Angus said yesterday. He was worried. “He hasn’t alienated you yet. Hasn’t tossed you away the way he did his own wife. I want you to try to talk to him.”

“No pressure,” I’d said. It was only his son we were talking about.

“All the pressure in the world,” he’d replied gravely.

So today, I grasp at the only thing I can think of that might draw him out. The last thing we have left in common.

:got the car running. thought you might want to see.: I text to Jack.

:heading down now. wear a coat. garage is cold and the heaters not working.:

:yes, mom: he replies. I can almost pretend it’s a joke.

I do have a plan, stuff to do, things to work on. In case Jack doesn’t show. Or in case he does. I can keep busy. So when I get down to the garage, I shove my sleeves up and pop the hood.

I’ve had my head under the hood for a good half hour when I straighten up, rubbing the small of my back, and notice Jack sitting on the edge of a tool chest, waiting.

“Jesus. How long you been there?” I wipe my sleeve across my forehead.

He shrugs. He looks small in his jeans and light windbreaker. Reduced, somehow.

I clench my jaw, forcing the rest of me to relax. Take a breath. “Well. I’m glad you came. She’s still not much to look at, but she’s alive. That’s something.” I glance at him. “Guess I have you and Angus to thank? For the engine?”

“No thanks needed.” He shrugs again. “We were there, and I knew you wanted that one, so.”

He says it like he’d picked up a gallon of milk.

“Well. It was nice of you.” I fall silent. It’s like talking to a stranger. Some guy who gives you change for the bus because he has it and you don’t. “Um. You wanna check her out?”

“Sure.” He looks vaguely embarrassed. “But you know I can’t make ‘em run. I just drive.”

“Don’t need you to make her run. Though there’s a couple things would go easier with an extra pair of hands.” I tuck the prop back down, lower the hood and let it drop. The clang echoes through the garage. “First, though, just listen to her.”

I climb into the driver’s seat and shove the passenger door open from the inside. Jack catches it as it swings open, protecting the hinge, and slides inside.

“You usually leave the window rolled down, just reach in?” It’s a clinical question.

“Haven’t bothered. Nobody’s sat on that side before.”

His glance is is quick, birdlike. Barely more than a brief motion of his chin. Anyone else would have missed it.

“Just listen,” I say again, and turn the key.

The engine roars into life pretty much immediately. I’ve tinkered with it a bit since the day I dropped it in. I hadn’t really meant to; I’d meant to leave her alone a while, but she kept drawing me back, this car. I give her a little gas, let the sound bounce off the walls. Glance at Jack. He used to fill the space, when we drove together. Now he looks like a kid. He is a kid, I remind myself.

His eyes widen a little at the first cough and roar, and then he settles, his shoulders sinking back. He inhales, slow, through his nose, consuming the sound and the scent of grease, exhaust, ozone from a welder. The exhale is even slower, silent. Finally he reaches out and rests his fingertips on the dash, his eyes watching a horizon that doesn’t exist.

“She’s gorgeous, isn’t she?” I ask softly, watching his face, his fingers on the dashboard. He’s in there, my Jack, and I use the possessive deliberately, because the people I love, I can’t give them up.

“She’s got the voice of an angel,” he says quietly, still listening. “God. She sounds like… like Judy Henske or something. Like she’s been through hell and just kept right on, and now she’s bragging about it.”

I glance quickly at him, noting the pronoun. “Yeah. Yeah, exactly like that.” I listen too, adjusting my foot on the gas to hear her range. “She has, I think. Been through hell. I figure, this car, she’s got nothing left to lose. ‘Least she’s got a voice now, and someone to listen to her.”

Jack’s eyes drift closed as the engine revs, open slowly as it subsides. Like riding a wave.

“I useta jack cars like this. Not for money. You could never sell a car like this for what it’s worth, not to a chop shop. New cars, those were good. Lexus, Audi, all that. But these. I useta take em and just go riding.” His fingers trace patterns on the dashboard that almost look familiar, that crystallize with his next words. “Down Lakeshore, in on the Dan Ryan, if it wasn’t crowded. Other places. You could never do it too long. But for a while, it was like being…. well. Just being.”

I’m afraid to breathe while he’s talking. Afraid the sound of blinking my eyes will interrupt him. “I know what you mean. ‘S why I’d take my mom’s car, sometimes, when she was passed out. Feels like nothing else matters, for a little while. Like nobody can touch you. I get that.”

“Do you.” His voice is flat and distant.

I shrug. “A little.” I slide my hands down either side of the wheel, noting the worn spots where the covering is rough against my fingers. “You ever get caught?”

He moves a shoulder, his windbreaker sliding against the orange-peel of the car’s aged vinyl seat.

I take my foot off the gas, let her idle. The low thrum-thrum-thrum rhythm settles into my bones, comfortable, like it’s supposed to be there. “You wanna drive?” I ask. “So to speak.”

The edges of his eyes soften. “Yeah, but she’s your girl. You want somebody to help put her through her paces when you get wheels on her, I’m there; right now I’d just be making noise.”

“That all I’m doing? Making noise?” I push it all the way to the floor. Someone’s going to come out and yell at me, I’m sure of it, but I don’t care. It’s loud, louder than I’d expected in the confined space of the garage, large as it is. The wheel shakes in my hands, and I ease up.

“Feels like if I listen hard enough, I’ll hear what she’s trying to say. It’s not like I’m going anywhere, the shape she’s in.” I let her idle again.

“Where are you going, Jackie?” I barely breathe it, but I know he can hear.

He’s absolutely still, gone deep within himself. His hand, balanced on the dash, is rock-steady. He might as well be a statue, a doll.

His hand drops to the door handle, he yanks the lever, and he’s gone into the shadows of the garage, moving smoothly, not so fast that he’d attract notice but not so slow that he’s easy to catch up with. Just like he drives.

I watch him walk away, watch till he’s out of sight, my back stiff and my hands white-knuckled on the wheel. And when I can’t see him anymore I bend, crumple over the wheel like I’d just driven her into a wall. And I cry, like a stupid little girl, big wracking sobs that I hope can’t be heard over the sound of the engine.

At some point I stop sobbing and just sit there with my cheek pressed against the curve of the wheel. I blew it, I think. I fucking blew it. The car’s still rumbling. I turn her off with a jerk of my wrist.

I lean over and pull the passenger door shut. Stare at it a moment. Reach over again and roll the window down, all the way.

Then I get out, shut my door behind me. Give her a gentle pat, and start walking toward the tram. As I leave the garage I can see his footprints, small and lonely in the grit.

[Wondering where Jack went? Read Rowan’s side of the story…]

5 thoughts on “Listening [the long version]”